Alongside Moctezuma and Benito Juárez, Pancho Villa is probably the best-known figure in Mexican history. Villa legends pervade not only Mexico but the United States and beyond, existing not only in the popular mind and tradition but in ballads and movies. There are legends of Villa the Robin Hood, Villa the womanizer, and Villa as the only foreigner who has attacked the mainland of the United States since the War of 1812 and gotten away with it. Whether exaggerated or true to life, these legends have resulted in Pancho Villa the leader obscuring his revolutionary movement, and the myth in turn obscuring the leader. Based on decades of research in the archives of seven countries, this definitive study of Villa aims to separate myth from history. So much attention has focused on Villa himself that the characteristics of his movement, which is unique in Latin American history and in some ways unique among twentieth-century revolutions, have been forgotten or neglected. Villa’s División del Norte was probably the largest revolutionary army that Latin America ever produced. Moreover, this was one of the few revolutionary movements with which a U.S. administration attempted, not only to come to terms, but even to forge an alliance. In contrast to Lenin, Mao Zedong, Ho Chi Minh, and Fidel Castro, Villa came from the lower classes of society, had little education, and organized no political party. The first part of the book deals with Villa’s early life as an outlaw and his emergence as a secondary leader of the Mexican Revolution, and also discusses the special conditions that transformed the state of Chihuahua into a leading center of revolution. In the second part, beginning in 1913, Villa emerges as a national leader. The author analyzes the nature of his revolutionary movement and the impact of Villismo as an ideology and as a social movement. The third part of the book deals with the years 1915 to 1920: Villa’s guerrilla warfare, his attack on Columbus, New Mexico, and his subsequent decline. The last part describes Villa’s surrender, his brief life as a hacendado, his assassination and its aftermath, and the evolution of the Villa legend. The book concludes with an assessment of Villa’s personality and the character and impact of his movement.

Be the first to review The Life and Times of Pancho Villa. 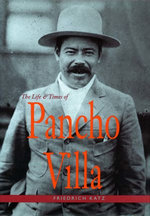