'There have been large magazines with tiny circulations and there have been diminutive sheets which have reached thousands of readers. But all 'little magazines' have been small in one or another of these ways, and usually in both... And yet most of them have had arrestingly large-scale ambitions...'

From Ian Hamilton (1938-2001), himself the founder of the Review and New Review, comes this matchless survey (first published in 1976) of the literary magazine from 1912-1950: concentrating on those periodicals that enjoyed dominant editorial personalities (the likes of Pound, Eliot, Cyril Connolly) and which, ultimately, proved central to their cultural epoch.

'Our one consolation for Ian Hamilton's early death is that his work seems to have lived on with undiminished force. He helped to shape our generation and at this rate may well do the same for the next as well.' Clive James

Be the first to review The Little Magazines. 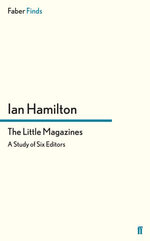