The Lost History of Christianity

“Jenkins is one of America’s top religious scholars.”

The Lost History of Christianity by Philip Jenkins offers a revolutionary view of the history of the Christian church. Subtitled “The Thousand-Year Golden Age of the Church in the Middle East, Africa, and Asia—and How It Died,” it explores the extinction of the earliest, most influential Christian churches of China, India, and the Middle East, which held the closest historical links to Jesus and were the dominant expression of Christianity throughout its first millennium. The remarkable true story of the demise of the institution that shaped both Asia and Christianity as we know them today, The Lost History of Christianity is a controversial and important work of religious scholarship that sounds a warning that must be heeded.

Be the first to review The Lost History of Christianity. 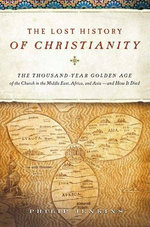 The Lost History of Christianity

History of religion Christianity Biblical studies & exegesis
Hold on while we process your request.