This is the 10th episode in the second season of The Witch Who Came In From The Cold, a 13-episode serial from Serial Box Publishing. This episode written by Cassandra Rose Clarke.

In Season 2, Episode 10, Edith follows a lead down a dangerous trail to uncover new secrets and a shocking conspiracy. Nadia faces the consequences of her affair of the heart. Zerena plots a course back into Terzian's good graces.

Be the first to review The Mirror Cracked (The Witch Who Came in from the Cold Season 2 Episode 10). 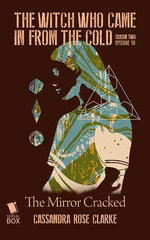