The Mystery of the Semi-Detached

" He was waiting for her, he had been waiting an hour and a half in a dusty suburban lane, with a row of big elms on one side and some eligible building sites on the other-and far away to the south-west the twinkling yellow lights of the Crystal Palace. It was not quite like a country lane, for it had a pavement and lamp-posts, but it was not a bad place for a meeting all the same: and farther up, towards the cemetery, it was really quite rural, and almost pretty, especially in twilight But twilight had long deepened into the night, and still he waited. He loved her, and he was engaged to be married to her, with the complete disapproval of every reasonable person who had been consulted. And this half-clandestine meeting was tonight to take the place of the grudgingly sanctioned weekly interview-because a certain rich uncle was visiting at her house, and her mother was not the woman to acknowledge to a moneyed uncle, who might "go off" any day, a match so deeply ineligible as hers with him. "

Edith Nesbit was an English author and poet who was born in 1858.

As well as writing for children, she wrote poems, plays and was also a political activist and co-founded the Fabian Society.

Be the first to review The Mystery of the Semi-Detached. 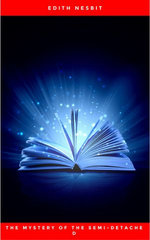 The Mystery of the Semi-Detached

Short stories Classic fiction
Hold on while we process your request.