The North and South Trilogy

Two families are united—and torn apart—by the Civil War in these three dramatic novels by the #1 New York Times–bestselling master of the historical epic.

In North and South, the first volume of John Jakes’s acclaimed and sweeping saga, a friendship is threatened by the divisions of the Civil War. In the years leading up to the Civil War, one enduring friendship embodies the tensions of a nation. Orry Main from South Carolina and George Hazard from Pennsylvania forge a lasting bond while training at the United States Military Academy at West Point. Together they fight in the Mexican-American War, but their closeness is tested as their regional politics diverge. As the first rounds are fired at Fort Sumter, Orry and George find themselves on different sides of the coming struggle. In John Jakes’s unmatched style, North and South launches a trilogy that captures the fierce passions of a country at the precipice of disaster.

In Love and War, the Main and Hazard families clash on and off the Civil War’s battlefields as they grapple with the violent realities of a divided nation. With the Confederate and Union armies furiously fighting, the once-steadfast bond between the Main and Hazard families continues to be tested. From opposite sides of the conflict, they face heartache and triumph on the frontlines as they fight for the future of the nation and their loved ones. With his impeccable research and unfailing devotion to the historical record, John Jakes offers his most enthralling and enduring tale yet.

In Heaven and Hell, the battle between the Mains and Hazards—and Confederate and Union armies—comes to a brilliant end**.** The last days of the Civil War bring no peace for the Main and Hazard families. As the Mains’ South smolders in the ruins of defeat, the Hazards’ North pushes blindly for relentless industrial progress. Both the nation and the families’ long-standing bond hover on the brink of destruction. In the series’ epic conclusion, Jakes expertly blends personal conflict with historical events, crafting a haunting page-turner about America’s constant change and unyielding hope.

This “entertaining [and] authentic dramatization” (The New York Times) is a thrilling tale of shifting loyalties, set during one of the darkest moments in American history.

Be the first to review The North and South Trilogy. 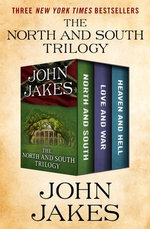 The North and South Trilogy

Sagas Historical fiction War & combat fiction
Hold on while we process your request.