The Passions of the Soul and Other Late Philosophical Writings

'Those most capable of being moved by passion are those capable of tasting the most sweetness in this life.' Descartes is most often thought of as introducing a total separation of mind and body. But he also acknowledged the intimate union between them, and in his later writings he concentrated on understanding this aspect of human nature. The Passions of the Soul is his greatest contribution to this debate. It contains a profound discussion of the workings of the emotions and of their place in human life - a subject that increasingly engages the interest of philosophers and intellectual and cultural historians. It also sets out a view of ethics that has been seen as a radical reorientation of moral philosophy. This volume also includes both sides of the correspondence with Princess Elisabeth of Bohemia, one of Descartes's keenest disciples and shrewdest critics, which played a crucial role in the genesis of The Passions, as well as the first part of The Principles of Philosophy, which sets out the key positions of Descartes's philosophical system. ABOUT THE SERIES: For over 100 years Oxford World's Classics has made available the widest range of literature from around the globe. Each affordable volume reflects Oxford's commitment to scholarship, providing the most accurate text plus a wealth of other valuable features, including expert introductions by leading authorities, helpful notes to clarify the text, up-to-date bibliographies for further study, and much more.

Be the first to review The Passions of the Soul and Other Late Philosophical Writings. 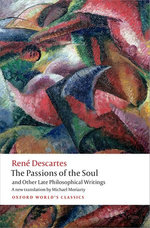 The Passions of the Soul and Other Late Philosophical Writings