The Procurator of Judea

Anatole France, born Jacques Anatole François Thibault (1844-1924), was one of the most famous writers of his time. A journalist, prolific author, and member of the Académie Française from 1896, he was awarded the Nobel Prize for literature in 1921, but since that time he has been somewhat under-recognized. Written in a very classical style but using irony, his Le Procurateur de Judée (The procurator of Judea) is a short tale intended to provoke reflections on history, memory, and our understanding of the world. It is the story of two Roman friends, Lamia and Pontius Pilate, who, at the end of their lives, are recalling their memories of Palestine. Pilate remembers everything: his disgust for Jews and their customs, his rivalries with other Roman officials, and the military crackdowns he ordered. Nothing escapes his memory—except for the existence of an unknown leader that a long time ago he condemned to death: “Jesus, of Nazareth! I can’t remember.” The very event that made his name go down in history is lost on him. The story was published on December 25, 1891, in the periodical Le Temps, under the title Conte pour le jour de Noël (Tale for Christmas Day). The next year, it was included in a collection of writings entitled L’Etui de nacre (The mother-of-pearl box), published on September 28, 1892. Presented here is a luxury edition of Le Procurateur de Judée, published by Pelletan in 1902, which includes 14 drawings by Eugène Grasset (1841-1917), in the bas-relief style of Ancient Rome.

Be the first to review The Procurator of Judea. 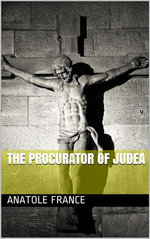 The Procurator of Judea

Religious & spiritual fiction Religion & beliefs
Hold on while we process your request.