The Proposition, the second book in the contemporary romance sports series, the Players, from Elizabeth Hayley about a professional hockey player who hires a wedding date.

Professional hockey player Ben Williamson doesn't quite know how he got himself into this situation; hiring someone to be his date to his brother's wedding is way out of character for him. But with family pressuring him to settle down, going stag just isn't an option. It would just be one more thing his polite, cultured family uses as ammo against him.

Ryan Cruz is having a bad day. Wait, make that a bad year. Broke, technically homeless, and living on a friend's couch, she's now also unemployed after her sharp tongue gets her fired from her job. So when a handsome stranger approaches her out of the blue with a proposition--he’ll pay her to be his date to his brother’s wedding for the weekend--accepting his offer is a no brainer. She needs the cash and figures it wouldn't be in the best interest of a professional athlete to murder her.

What starts as a simple business arrangement soon becomes more as these opposites attract and get caught up in the wedding magic. Will Ben and Ryan be able to turn their relationship into something more? Or is love based on a proposition too much of an obstacle to overcome?

Elizabeth Hayley is actually “Elizabeth” and “Hayley,” two friends who love reading romance novels to obsessive levels. This mutual love prompted them to put their English degrees to good use by penning their own. The product was Pieces of Perfect, their debut novel.

They learned a ton about one another through the process, like how they clearly share a brain and have a persistent need to text each other constantly (much to their husbands’ chagrin). They live with their husbands and kids in a Philadelphia suburb. Thankfully, their children are still too young to read their books.

Be the first to review The Proposition. 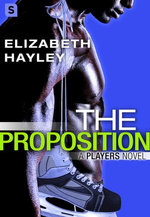