by Erin Bowman, Marieke Nijkamp,  Mackenzi Lee and others

In an anthology of revolution and resistance, a sisterhood of YA writers shines a light on a century and a half of heroines on the margins and in the intersections.

To respect yourself, to love yourself, should not have to be a radical decision. And yet it remains as challenging for an American girl to make today as it was in 1927 on the steps of the Supreme Court. It’s a decision that must be faced when you’re balancing on the tightrope of neurodivergence, finding your way as a second-generation immigrant, or facing down American racism even while loving America. And it’s the only decision when you’ve weighed society’s expectations and found them wanting. In The Radical Element, twelve of the most talented writers working in young adult literature today tell the stories of girls of all colors and creeds standing up for themselves and their beliefs — whether that means secretly learning Hebrew in early Savannah, using the family magic to pass as white in 1920s Hollywood, or singing in a feminist punk band in 1980s Boston. And they’re asking you to join them.

Marieke Nijkamp is the #1 New York Times-bestselling author of This Is Where It Ends. She is a storyteller, dreamer, globe-trotter, and geek. She currently resides in her home country, the Nertherlands.

Mackenzi Lee holds a BA in history and an MFA from Simmons College in writing for children and young adults. Her short fiction and nonfiction has appeared in Atlas Obscura, the Boston Globe, Crixeo, and the Newport Review, among others.

Her debut novel, This Monstrous Thing, won the PEN New England-Susan P. Bloom Children’s Book Discovery Award. Her second book, The Gentleman’s Guide to Vice and Virtue, was a New York Times bestseller and an ABA bestseller, earned five starred reviews, was a #1 Indie Next Pick, and received a 2018 Stonewall Book Award Honor and a New England Book Award.

She loves Diet Coke, sweater weather, and Star Wars. On a perfect day, she can be found enjoying all three. She currently calls Boston home, where she works as an independent bookstore manager and pets every dog she meets.

Sara Farizan, the daughter of Iranian immigrants, lives near Boston. She is the award-winning author of If You Could Be Mine and Tell Me Again How a Crush Should Feel. She is an MFA graduate of Lesley University and holds a BA in film and media studies from American University. Here To Stay is her third novel.

Dhonielle Clayton is the co-author of the Tiny Pretty Things series. She grew up in the Washington, DC, suburbs on the Maryland side and spent most of her time under her grandmother's table with a stack of books.

A former teacher and middle school librarian, Dhonielle is cofounder of CAKE Literary-a creative development company whipping up decidedly diverse books for a wide array of readers-and COO of the non-profit, We Need Diverse Books.

She's got a serious travel bug and loves spending time outside of the USA but makes her home in New York City, where she can most likely be found hunting for the best slice of pizza.

Jessica Spotswood is the editor of A Tyranny of Petticoats, the companion volume to The Radical Element. She grew up near the Gettysburg battlefield, in Pennsylvania, but now lives in Washington, D.C., where she works for the District of Columbia Public Library system as a children's library associate.

Be the first to review The Radical Element. 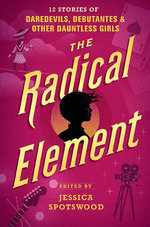 by Erin Bowman, Marieke Nijkamp,  Mackenzi Lee and others