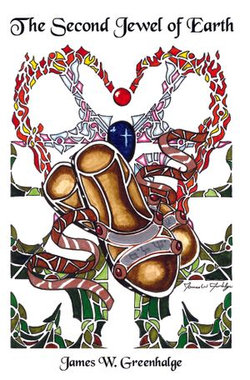 The Second Jewel of Earth

"So much collected wisdom and still no answers!" observed a very familiar male voice behind him.The hair on the back of his neck rose.No, it couldn't be!That was yesterday in another reality.He shivered involuntarily, hoping he was wrong about the voice.

The traveling begins again!The Second Jewel of Earth follows the continuing story of a solitary man swept up in a fantastic battle to save his world.But is it really his world?Centaurs, trolls and animal-headed human compromises inhabit this strange new reality, with malevolent enemies bent on his destruction.And the pendant about his neck glows with the presence of the First Jewel, a blood-red reminder that the King he serves is more fearsome than his enemies.

Sequel to his popular novel, The First Jewel of Earth, the author takes you on yet another journey to the distant past, as the Traveler searches for the second jewel to his incredible pendant. This series surveys Biblical prophesy and ancient history, revealing the origins of a supernatural war whose decisive battle is being fought today.As you join in this adventure, you will never travel alone.Come enjoy your journey!The Third Jewel of Earth is expected in late 2004.

Be the first to review The Second Jewel of Earth.

The Second Jewel of Earth