by David Williams, Drew Johnson,  Rachel Deering and others

NEW ONGOING SERIES FROM DARK CIRCLE! “Daughter of the Revolution, Part 2” Running out of places to hide, the Shield discovers she is not without allies. Detective Nicole Simmons seems to know exactly who—and what—the Shield is, but with the enigmatic government agent Walter Chase closing the noose, the pair faces two difficult questions: why is the Shield back now… and whose side is she really on?

Chuck Wendig is a novelist, screenwriter and game designer. He's the author of many published novels, including but not limited to: Blackbirds, The Blue Blazes, and the YA Heartland series. He is co-writer of the short film Pandemic and the Emmy-nominated digital narrative Collapsus.

Wendig has contributed over two million words to the game industry. He is also well known for his profane-yet-practical advice to writers, which he dispenses at his blog, terribleminds.com, and through several popular e-books, including The Kick-Ass Writer, published by Writers Digest. He currently lives in the forests of Pennsyltucky with wife, tiny human, and red dog.

Be the first to review The Shield #2. 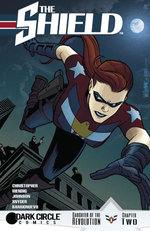 by David Williams, Drew Johnson,  Rachel Deering and others