The Short Stories Of Edith Nesbit

The Short Stories Of Edith Nesbit. The short story is often viewed as an inferior relation to the Novel. But it is an art in itself. To take a story and distil its essence into fewer pages while keeping character and plot rounded and driven is not an easy task. Many try and many fail. In this series we look at short stories from many of our most accomplished writers. Miniature masterpieces with a lot to say. In this volume we examine some of the short stories of Edith Nesbit. Edith Nesbit is more famously known as a writer of childrens stories (stories some of which are available in our other volumes). But in this volume we explore her short stories. And they bring out a very different side of her imagination. For a start they are dark in nature, short in length. They brim with atmosphere around characters that could be our neighbours. And they almost always end with a fright. Born in 1858 in Kennington, then part of Surrey and now London. Her early life was one of constant house changes before meeting, age 17, Hubert Bland who she was to marry three years later whilst she was 7 months pregnant. Additionally Bland kept his affair with another woman going throughout. The two children of this relationship were raised by Edith as her own as well as their own three. They founded the Fabian Society in 1884 naming one of their sons Fabian in its honour. Together they edited the Society's journal; Today. Edith was an active lecturer and prolific writer on socialism during the 1880s and co-wrote with her husband under the name "Fabian Bland", though this activity dwindled with her mounting success as a children's author grew. Several members of the Fabian Society founded the London School Of Economics where she was often a guest lecturer. Edith Nesbit lived from 1899 to 1920 in Well Hall House, Eltham, Kent, which appears in fictional guise in several of her books. On 20 February 1917, some three years after Bland died, Nesbit married Thomas "the Skipper" Tucker. They were married in Woolwich, where he was a ship's engineer on the Woolwich Ferry. Towards the end of her life she moved to a house called "Crowlink" in Friston, East Sussex, and later to "The Long Boat" at Jesson, St Mary's Bay, New Romney, East Kent where, suffering from lung cancer, she died in 1924 and was buried in the churchyard of St Mary in the Marsh. Thought of as the first modern writer for children she also wrote for adults producing over 50 books in total. Like many consummate writers she mastered many areas of writing and in this we include her Poetry and her short stories. Some of these stories are also available as an audiobook from our sister company Word Of Mouth. Many samples are at our youtube channel http://www.youtube.com/user/PortablePoetry?feature=mhee The full volume can be purchased from iTunes, Amazon and other digital stores and read for you by Richard Mitchley. Index Of Stories; Man Size In Marble; Uncle Abrahams Romance; The Ebony Frame; One Way Of Love; The Power Of Darkness; John Carringtons Wedding

Edith Nesbit was an English author and poet who was born in 1858.

As well as writing for children, she wrote poems, plays and was also a political activist and co-founded the Fabian Society.

Be the first to review The Short Stories Of Edith Nesbit. 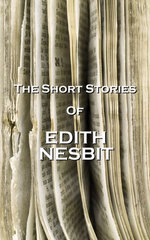 The Short Stories Of Edith Nesbit