The Stone Mage and the Sea

In a world where the huge, red-sanded deserts are ruled by Stone Mages and the vast coastlines by Sky Wardens, any child with magic ability is taken away to the Haunted City to be trained in the Change. Fundelry is a small town much like any other in the Strand. The people have little tolerance for anyone who stands out, and Sal and his father are strangers, running from someone ... or something. Sal is rescued from the local bully by Shilly and her teacher Lodo, a mysterious tattooed man who seems to know more about Sal than Sal himself. And, strangely, Sal’s father seems to want to say put for a while. But soon the Sky Wardens will come to Fundelry — before then Sal must uncover the connection between Lodo and the mother he never met, in order to escape a fate that seems to have been chosen for him before he was even born ... Praise for The Stone Mage and the Sea by Sean Williams‘The reason why I haven’t given up completely on fantasy trilogies is because there are people out there who believe in the genre and continue to put out interesting books rather than following the formula. Sean Williams is one of those people.’ Cheryl Morgan ‘An alchemical blend of elemental magic, tragic romance and the coming of age of a young boy who is yet to come into his own power which exists, poised between Earthsea and Mad Max, where the magic of fantasy meets the wonder of science fiction.’ Locus

Be the first to review The Stone Mage and the Sea. 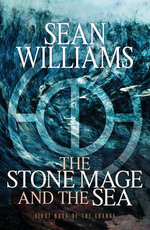 The Stone Mage and the Sea