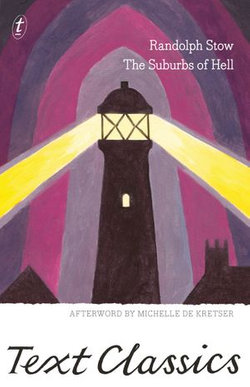 His eyes are on the one eye of the rifle. His mouth splits open his brown beard. He throws up a hand, palm outward, in an unwilled, futile gesture to ward off death.

A killer is hounding the seaside town of Old Tornwich. Residents are gripped by fear and suspicion, and the finger of blame is pointed in all directions. But the bodies keep falling and the crimes remain unsolved, the culprit at large. No mere whodunnit, The Suburbs of Hell—its story inspired by a real-life serial killer—is a profoundly disturbing psychological drama with a devastating conclusion, the final work of one of Australia’s greatest writers.

Julian Randolph 'Mick' Stow was born in Geraldton, Western Australia, in 1935. He attended local schools before boarding at Guildford Grammar in Perth, where the renowned author Kenneth Mackenzie had been a student.

While at university he sent his poems to a British publisher. The resulting collection, Act One, won the Australian Literature Society’s Gold Medal in 1957—as did the prolific young writer's third novel, To the Islands, the following year. To the Islands also won the 1958 Miles Franklin Literary Award. Stow reworked the novel for a second edition almost twenty-five years later, but never allowed its two predecessors to be republished.

He worked briefly as an anthropologist’s assistant in New Guinea—an experience that subsequently informed Visitants, one of three masterful late novels—then fell seriously ill and returned to Australia. In the 1960s he lectured at universities in Australia and England, and lived in America on a Harkness fellowship. He published his second collection of verse, Outrider; the novel Tourmaline, on which critical opinion was divided; and his most popular fiction, The Merry-Go-Round in the Sea and Midnite.

For years afterwards Stow produced mainly poetry, libretti and reviews. In 1969 he settled permanently in England: first in Suffolk, then in Essex, where he moved in 1981. He received the 1979 Patrick White Award.

Randolph Stow died in 2010, aged seventy-four. A private man, a prodigiously gifted yet intermittently silent author, he has been hailed as ‘the least visible figure of that great twentieth-century triumvirate of Australian novelists whose other members are Patrick White and Christina Stead’.

Praise for The Suburbs of Hell

‘Both a traditional murder mystery and a meditation on the random depredations of death.’ Australian Book Review

‘Poetic accuracy is only one aspect of a rich talent…Mr Stow has a narrative gift as well…He is, in fact a real novelist.’ Observer

‘A cleverly crafted whodunit… Stow is an example of the high calibre of Australian writers of yesterday. Many of these authors have been forgotten or perhaps overlooked. It’s pleasing to see that Text Publishing released this edition in 2015 and continue to foster some of Australia’s buried talents by re-publishing under Text Classics. For fans of the psychological thriller and those readers who enjoy a foray into a metaphorical tale, Stow delivers the goods.’ Salty Popcorn Michelle de Kretser was born in Sri Lanka and emigrated to Australia when she was 14. Educated in Melbourne and Paris, Michelle has worked as a university tutor, an editor and a book reviewer.

She is the author of The Rose Grower , The Hamilton Case, which won the Commonwealth Prize (SE Asia and Pacific region) and the UK Encore Prize, and The Lost Dog, which was widely praised by writers such as AS Byatt, Hilary Mantel and William Boyd and won a swag of awards, including: the 2008 NSW Premier's Book of the Year Award and the Christina Stead Prize for Fiction, and the 2008 ALS Gold Medal.

Be the first to review The Suburbs of Hell. 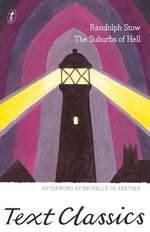