The Sympathy of Things

'If there is one thing we can learn from John Ruskin, it is that each age must find its own way to beauty' writes Lars Spuybroek in The Sympathy of Things, his ground-breaking work which proposes a radical new aesthetics for the digital era.

Spuybroek argues that we must 'undo' the twentieth century and learn to understand the aesthetic insights of the nineteenth-century art critic John Ruskin, from which he distils pointers for the contemporary age. Linking philosophy, design, and the digital, with art history, architecture, and craft, Spuybroek explores the romantic notion of 'sympathy', a core concept in Ruskin's aesthetics, re-evaluating it as the driving force of the twenty-first century aesthetic experience. For Ruskin, beauty always comprises variation, imperfection and fragility, three concepts that wholly disappeared from our mindsets during the twentieth century, but which Spuybroek argues to be central to contemporary aesthetics and design.

Revised throughout, and a new foreword by philosopher Brian Massumi, this is a new edition of a seminal work which has drawn praise from fields as diverse as digital architecture and speculative realism, and will continue to be influential as it wrests Ruskin's ideas out of the Victorian era and reconstructs them for the modern age.

Be the first to review The Sympathy of Things. 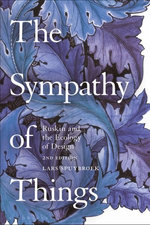 The Sympathy of Things