The Tea Master and the Detective

Winner of the 2018 Nebula Award for Best Novella

Finalist for the Hugo Award for Best Novella

“A window onto a beautifully developed world that widens the meaning of space opera.” —New York Times

Once, the mindship known as The Shadow's Child was a military transport. Once, she leapt effortlessly between stars and planets, carrying troops and crew for a war that tore the Empire apart. Until an ambush killed her crew and left her wounded and broken.

Now the war is over, and The Shadow's Child, surviving against all odds, has run away. Discharged and struggling to make a living, she has no plans to go back into space. Until the abrasive and arrogant scholar Long Chau comes to see her. Long Chau wants to retrieve a corpse for her scientific studies: a simple enough, well-paid assignment.

But when the corpse they find turns out to have been murdered, the simple assignment becomes a vast and tangled investigation, inexorably leading back to the past--and, once again, to that unbearable void where The Shadow's Child almost lost both sanity and life...

“[The Tea Master and the Detective] is a window onto a beautifully developed world that widens the meaning of space opera, one that centers on Chinese and Vietnamese cultures and customs instead of Western military conventions, and is all the more welcome for it.” —Amal El-Mohtar, New York Times

“The Tea Master and the Detective is the Sherlock Holmes retelling I always wanted and now I have it. And I want so much more of it.” —Ana Grilo, Kirkus

“The Tea Master is an astonishing Holmesian mystery, in which Holmes is a woman and Watson is a spaceship. It is everything I wanted it to be. Tea, space, and mysteries within mysteries.” —Mary Robinette Kowal

“Ingenious… As a classical blend of far-future SF and traditional murder mystery, The Tea Master and the Detective should satisfy readers unfamiliar with the Xuya universe, but at the same time it’s an intriguing introduction to that universe, much of which seems to lie just outside the borders of this entertaining tale.” —Gary K. Wolfe, Locus

“De Bodard constructs a convincingly gritty setting and a pair of unique characters with provocative histories and compelling motivations. The story works as well as both science fiction and murder mystery, exploring a future where pride, guilt, and mercy are not solely the province of humans.” —Publishers’ Weekly

Be the first to review The Tea Master and the Detective. 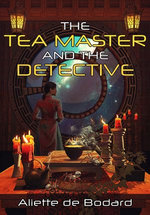 The Tea Master and the Detective

Space opera Classic fiction
Hold on while we process your request.