The Wars of Spanish American Independence 1809–29

In 1808, Napoleon Bonaparte treacherously outmaneuvered the corrupt Spanish Bourbons and installed his brother Joseph as King of Spain, igniting the flames of war across the Iberian Peninsula. Far across the Atlantic, this event lit the fuse for a war that raged for the better part of two decades as Spain's colonies grasped the opportunity to seize their own independence. The Wars of South American Independence began with confused, scattered uprisings in 1809 and ended with a half-hearted expedition against Mexico in 1829. The South American revolutions heralded Spain's downfall as a world power and marked the first expression of an expansionist foreign policy by the United States of America. Featuring specially commissioned full-color maps and drawing upon the latest research, this volume traces the military events of the Independence period and sheds new light on the leaders, men, and battles that reshaped the hemisphere. The myriad campaigns, often uncoordinated and occurring thousands of miles apart, are brought together and related to the wider context, in this engaging introduction to a crucial period in the history of the Americas.

Be the first to review The Wars of Spanish American Independence 1809–29. 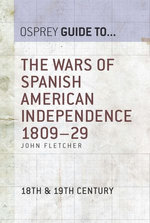 The Wars of Spanish American Independence 1809–29