The long awaited night has come. It is 1745, and the BloodKing calls his army to battle and will bring them South to claim his birthright; the throne of Britain.

Only the Watchers on the old wall stand in his way.

The old wall is a border: England and Scotland, South and North, light and darkness.

It is 1745, and the long-awaited night as come. The Bloodking calls his army to battle, and armed with the powers of the undead and the damned, he will bring them South to claim his birthright: The throne of Britain.

Only the old Watchers on the wall stand in his way. They, their swords, and their faith. But too much time has passed and the Watch has grown slack and ill-prepared for the coming war. Only Martin and Sean have seen the horrors that lie ahead for humankind. Only they have the power to stop it.

Now, two young officers of the Watch have a duty to perform:

It is 1745. The forces of the Boy-King have decimated Milecastle. The Thane is dead, another chosen, and Mary Campbell has been taken by the Boy-King as his unholy bride.

The town is a scene of carnage and the Watchers have failed...but they may yet have a chance at redemption. Can Martin be a leader to his people in their time of need?

And can Sean fulfill his oath without losing his soul?

Neither have much time to consider, for the Boy King is on the rampage...and his heir is waiting to be born in the Blood Chapel of Ross-Lynn.

A great victory has been won, but the war is far from over.

The Boy-King now needs his bride…and his heir.

Only the young officers of the Watch can stop him. But they have their own battles to face and their own demons to fight. And those inner demons are not proving so easy to control as they are lured to the blood-soaked moors of Culloden for the final confrontation.

The dead are rising. A new darkness is fast approaching. Victory is close…but will the hands of Martin and Sean be too bloodied for them to grasp it?

The conclusion of the critically-acclaimed Watchers series!

Praise for the Watchers Trilogy!

Be the first to review The Watchers Trilogy- Omnibus Edition. 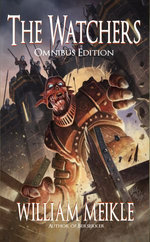