One of This Year’s Hottest New YA Series — Goodreads

When the world doesn't want

you to be who you are,

you must become more yourself

than you knew you could be.

London. 1789. More than anything in the world, Wendy Darling wants to be the captain of a ship, but women aren't allowed in the Royal Navy. When she learns the Home Office is accepting a handful of women into its ranks, she jumps at the chance, joining the fight against the most formidable threat England has ever faced. Magic.

But the secret service isn’t exactly what she hoped. Accompanied by a reimagined cast of the original Peter Pan, Wendy soon discovers that her dreams are as far away as ever, that choosing sides isn’t as simple as she thought, and that the only man who isn't blinded by her gender ... might be her nation's greatest enemy.

Praise for The Wendy, by Erin Michelle Sky & Steven Brown:

“All the markings of a classic … captivating and delightful.” — Lydia Sherrer, USA TODAY Bestselling Author of Love, Lies & Hocus Pocus

“This is a strong retelling of Peter Pan, with an empowered female protagonist who carves her own path. Wendy’s sharp wit is truly impressive.” — School Library Journal

“From page one right up to the end, The Wendy held me enthralled.” — Readers’ Favorite

"(P)ick it up and begin a great adventure! I DARE YOU!!! If you think you know the story of Wendy, Peter Pan and the Lost Boys, you will find that you never did, until now! You will not regret the time you give to this most entertaining tale of Peter, Windy and all of the others, from Captain "Hook" to Smee, to Nana and the lads. Five stars is not enough! Straight on until morning!!! – Caius Fabius, Goodreads

Fans of Brigid Kemmerer's A Curse So Dark and Lonely, Gena Showalter's The Evil Queen and Leigh Bardugo's Shadow and Bone will love the rip-rollicking adventure, fantasy and historical elements of The Tales of the Wendy by Dragon Authors Steven Brown and Erin Michelle Sky.

Be the first to review The Wendy. 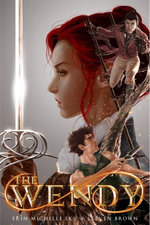