The Witch Who Came In From The Cold: The Complete Season 1

Welcome to Prague, 1970: ground zero in a Cold War of spies and sorcerers. The streets are a deadly chessboard on which the CIA and KGB make their moves, little dreaming that a deeper game is being played between the Consortium of Ice and the Acolytes of Flame, ancient organizations that seek to harness elemental magic.

Tanya Morozova is a KGB officer and the latest in a long of Ice sorceresses; Gabe Pritchard is a CIA officer and reluctant Ice recruit. Enemies at one turn, but forced into alliances at the next, their relationship is as explosive as the Cold War itself.

**Praise for The Witch Who Came in from the Cold:

"The installments are easy to read one at a time, but the tangles of alliances, secrets, and shocking double-crosses will have readers up all night mumbling, “Just one more.” —Publishers Weekly, starred review**

Be the first to review The Witch Who Came In From The Cold: The Complete Season 1. 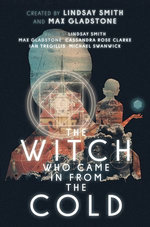 The Witch Who Came In From The Cold: The Complete Season 1