The Worlds of James Buchanan and Thaddeus Stevens

The Worlds of James Buchanan and Thaddeus Stevens examines the political interests, relationships, and practices of two of the era’s most prominent politicians as well as the political landscapes they inhabited and informed. Both men called Lancaster County, Pennsylvania, their home, and both were bachelors. During the 1850s, James Buchanan tried to keep the Democratic Party alive as the slavery debate divided his peers and the political system. Thaddeus Stevens, meanwhile, as Whig turned Republican, invested in the federal government to encourage economic development and social reform, especially antislavery and Republican Reconstruction.

Considering Buchanan and Stevens’s divergent lives alongside their political and social worlds reveals the dynamics and directions of American politics, especially northern interests and identities. While focusing on these individuals, the contributors also explore the roles of parties and patronage in informing political loyalties and behavior. They further track personal connections across lines of gender and geography and underline the importance of details like who regularly dined and conversed with whom, the complex social milieu of Washington, the role of rumor in determining political allegiances, and the ways personality and failing relationships mattered in a hothouse of national politics fueled by slavery and expansion.

The essays in The Worlds of James Buchanan and Thaddeus Stevens collectively invite further consideration of how parties, personality, place, and private lives influenced the political interests and actions of an age affected by race, religion, region, civil war, and reconstruction.

Be the first to review The Worlds of James Buchanan and Thaddeus Stevens. 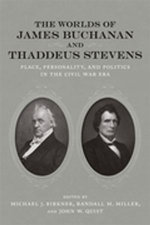 The Worlds of James Buchanan and Thaddeus Stevens