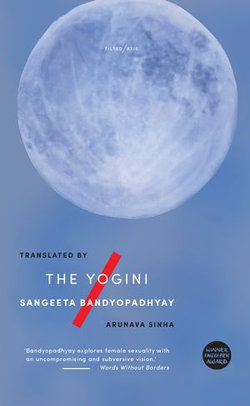 by Sangeeta Bandyopadhyay and Arunava Sinha

Winner of an English PEN award

With her days split between a passionate marriage and a high-octane television studio job, Homi is a thoroughly modern young woman – until one day she is approached by a yogi in the street.

Convinced that the yogi is a manifestation of fate, Homi embarks on a series of increasingly desperate attempts to prove that her life is ruled by her own free will, much to the alarm of her no-nonsense husband and cattily snobbish mother. Her middle-class Kolkata life, and the relationships that define her identity, are disturbed to the point of disintegration.

Following the inexorable pull of tradition, Homi ends up in Benaras, the holy city on the banks of the Ganga, where her final battle with fate plays out.

The new novel by Sangeeta Bandyopadhyay is a brilliant portrait of a young millennial in contemporary India who is torn between her modern life and tradition. Bandyopadhyay's unflinching look at sex, work and family redefines comfortable notions of what the life of young women is supposed to look like.

Be the first to review The Yogini.

by Sangeeta Bandyopadhyay and Arunava Sinha

Classic fiction Fiction
Hold on while we process your request.