The Yogini With A Thousand Eyes

Here is a story of a woman's revolutionary approach to everyday life--dancing with each day's trivial events.

Shaped by her yogic practices, Annajoy carries on an elegant meditative dance with the unremarkable trivial events occurring during her daily life in Amsterdam. Using imagination and reverie, she discovers mysterious minidramas enacted by characters more cleverly disguised than revelers during Carnival. In her evolved consciousness, Amsterdam becomes an art gallery, funhouse and more-than-human community, where meaning is a daily event, and oases of mood catapult her into moments of ecstasy.

Despite courageous efforts to share these mystical experiences, Annajoy tragically fails to inspire others to explore this unsuspected dimension of daily life. Will her rationally-inclined husband hack deep enough into the mystery of trivial events to assist her? Could her city help? Or must Annajoy live surrounded by people who see Amsterdam as a den of ordinary streets and canals, littered with meaningless trivia gesturing in the wind?

This is a story of bold creation, imaginative genius and Spirit hiding beneath the humble disguises of the mundane. It is a story of one woman crossing a spiritual frontier that offers a glimpse, not only of her and her city but, as in Escher’s ball, an unusual view of ourselves and the cities we live in.

Be the first to review The Yogini With A Thousand Eyes. 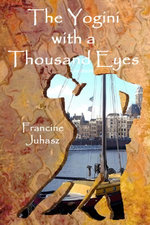 The Yogini With A Thousand Eyes

Fiction Contemporary fiction
Hold on while we process your request.