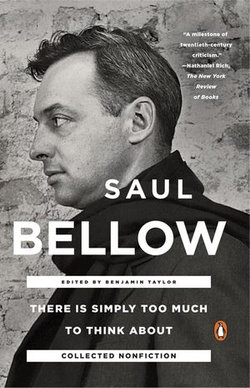 There Is Simply Too Much to Think About

by Saul Bellow and Benjamin Taylor

“Bellow’s nonfiction has the same strengths as his stories and novels: a dynamic responsiveness to character, place and time (or era) . . . And you wonder—what other highbrow writer, or indeed lowbrow writer has such a reflexive grasp of the street, the machine, the law courts, the rackets?” —Martin Amis, The New York Times Book Review

The year 2015 marks several literary milestones: the centennial of Saul Bellow’s birth, the tenth anniversary of his death, and the publication of Zachary Leader’s much anticipated biography. Bellow, a Nobel Laureate, Pulitzer Prize winner, and the only novelist to receive three National Book awards, has long been regarded as one of America’s most cherished authors. Here, Benjamin Taylor, editor of the acclaimed Saul Bellow: Letters, presents lesser-known aspects of the iconic writer.

Arranged chronologically, this literary time capsule displays the full extent of Bellow’s nonfiction, including criticism, interviews, speeches, and other reflections, tracing his career from his initial success as a novelist until the end of his life. Bringing together six classic pieces with an abundance of previously uncollected material, There Is Simply Too Much to Think About is a powerful reminder not only of Bellow’s genius but also of his enduring place in the western canon and is sure to be widely reviewed and talked about for years to come.

Saul Bellow was born in Canada but brought to Chicago at the age of nine and educated there. He attended the Universities of Chicago, Northwestern and Wisconsin as well as fitting in a wartime stint in the Merchant Marine.

His first novel - Dangling Man - was published when he was in his twenties. Later novels, The Victim, The Adventures of Augie March, Seize the Day, Henderson the Rain King, Herzog, Mr Sammler's Planet, Humboldt's Gift, The Dean's December and Him With His Foot In His Mouth And Other Stories have brought him innumerable literary grants, awards, prizes, scholarships, fellowships and honours not only in his own country but internationally as well.

He is probably the only man to have received an Honorary Degree from both Harvard and Yale in the same year. He has also written plays, short stories, articles for learned journals, been a war correspondent in Israel and held positions in a number of universities in the United States and elsewhere. He speaks four or five languages and has travelled extensively.

In 1976 Saul Bellow was awarded the Nobel Prize in Literature. In 1984 President Mitterand made him a commander of the Legion of Honour.

Be the first to review There Is Simply Too Much to Think About. 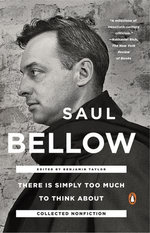 There Is Simply Too Much to Think About

by Saul Bellow and Benjamin Taylor

Anthologies (non-poetry) Literature: history & criticism
Hold on while we process your request.