Time and Free Will

“States of consciousness, sensations, feelings, passions, efforts, are capable of growth and diminution; a sensation can be said to be twice, thrice, four times as intense as another sensation of the same kind...”

In his classic essay, Time and Free Will, Henri Bergson, one of the most influential philosophers of his day, attempts to counter the arguments against free will, which he believes to be a matter of immense confusion among philosophers.

In all of human experience, he argues, life is experienced as a continuous flow rather than as a succession of distinct states of consciousness.

His novel concepts about the nature of time had a profound influence on many other philosophers, as well as on poets and novelists (and are said to have been the seed for À la recherce de temps perdu by Marcel Proust.

The concept of human will as being bound to time is in contrast to Immanuel Kant's theory that our free will is utterly divorced from concerns of time or space; and because human personalities express themselves in acts that cannot be predicted, Bergson declares free will to be an observable fact.

HENRI-LOUIS BERGSON (1859 –1941) was a French philosopher best known for his theory that processes of immediate experience and intuition are more significant than abstract rationalism and science for understanding reality. In 1927 he received the Nobel Prize in Literature, and in 1930 France awarded him its highest honor, the Grand-Croix de la Legion d'honneur.

Be the first to review Time and Free Will. 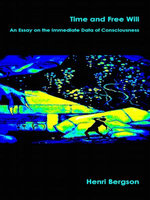 Time and Free Will