Hugo Nominee's Most Dazzling Novellas! Rog Philips' "Unthinkable" and "Incomprehensible," which have never been reprinted since their original publication in Amazing Stories half a century ago, are two outstanding examples of the thought variant story designed to open new ways of seeing and thinking about the universe in its readers. The Encyclopedia of Science Fiction hailed Phillips' work as "ingenious exercises in paradoxes of perception." None more so than this pair of short novels. As the author himself wrote in his Afterword to "Unthinkable," "In this story, an attempt has been made to depict [laws of nature that] conflict with human mentality. It is not the ordinary science fiction attempt. It is not new laws working in harmony with old, or new discoveries that fit into the old pattern. It is, if you please, an utterly alien bit of reality in conflict with the old. You won't like it at all--unless you have the type of mind that can reach a little way beyond experience. And though what you may 'see' may have no counterpart in all reality, if this story serves to expand your mental horizons, it has at least found an excuse for being written." No wonder the Encyclopedia says Rog Phillips stories "did much to raise the standards" of the sf of his time, and Multiple Hugo and Nebula Award winner Robert Silverberg, who as a young man admired Phillips work very much, wrote that Philips is "the master of a new type of sf writing." Put your own brain to the test with "Unthinkable" and "Incomprehensible," two unforgettable classics from the golden age of the science fiction pulps.

Be the first to review Unthinkable & Incomprehensible. 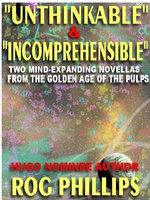