I was called trash by those who knew me, the product of a drunken night, an accidental daughter by the two I called Mom and Dad. I might never leave the trailer I called home, never have a life outside of the aged walls in my room, or the stained mattress I slept on.

But as much as the world tried to drag me down, I knew one thing. I had dreams, hopes, and ambition. One day I'd be free of the darkness that clung to me like a second skin. And then I decided to say screw it all and leave the decay behind. But before I could escape, I was taken, thrown in the back of a van, and told hell was waiting for me. And it looked like the devil himself had plans for me.

The Ruthless Rejects MC. Bastards. Savages. Criminals. We weren't good men, came from the wrong side of the tracks, but together we became a brotherhood, a family. We embraced how tarnished and dangerous we were.

Even if that family got blood on their hands, and ran on violence, we were as one and would always have each other's backs. I wasn't one of those misunderstood men who couldn't process what happened to them growing up. No, I embraced the darkness, let it consume me, change who I was. Now I was as evil as the devil himself.

And I was going to use that to my advantage to exact my revenge, to make the man who'd hurt the only person I'd ever cared about feel that pain ten times over.

He killed my sister, took the only light to my darkness. So I was going to take from him what he held dear. I was coming for his eighteen-year-old daughter. I was going to make her fall into the same darkness that had swallowed me whole from the very beginning.

I was going to make her bend to my will, pay for her father's sins tenfold. She was supposed to be a means to an end, the revenge I needed to feel whole once more. I was supposed to use her and toss her aside like what had been done to my sister.

But what I realized was that she was more than that.

Be the first to review Venom's Revenge. 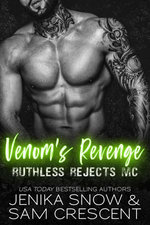 Adult & contemporary romance Romance Sagas Romance
Hold on while we process your request.