by Janice Maynard, Karen Booth,  Catherine Mann and others

When Isaiah Grayson places an ad for a convenient wife, no one compares to his assistant, Poppy Sinclair. Clearly the ideal candidate was there all along — and after only one kiss he wants her without question. Can he convince her to say yes without love?

When heiress Brooke Goodman rebels, her wild one-night stand turns out to be her coworker at the Texas Cattleman’s Club! How will she resist him? Especially when the sexy Texan agrees to a temporary marriage so she can get her inheritance, and she learns she’s expecting his child…

The only thing Charles Mikkelson III has ever lost was his marriage to Shana. But when an accident erases the last five years of her life, it’s a second chance to make things right. He wants her back — in his life, in his bed. Will their reunion last when her memory returns?

Objective: take down an evil businessman.

Rules: do not fall for him, no matter how darkly sexy he may be. He’ll hate her when he learns the truth…

A Texan For Christmas — Jules Bennett

Playboy Beau Elliot has come home to Pebblebrook Ranch for the holidays to prove he’s a changed man. But before he can reconcile with his family, he discovers his illegitimate baby…and the walking fantasy of his live-in nanny. Will temptation turn him into a family man…or lead to his ruin?

Real estate tycoon Jake Wheeler needs this deal. But the one sister who doesn’t want to sell is the same woman he had an affair with years ago…right before he broke her heart. Will she give him a second chance…in the boardroom and the bedroom?

Maisey Yates started writing stories from the moment she first learned how to form words with a pen. But she never had any idea what to write, and most stories sat started, half formed and half finished, but never completed.

During her high school and college years, she spent a lot of time dreaming about holding a book in her hands that had her name emblazoned across the front, but she did a lot more dreaming than actual writing.At her very first job she was fortunate enough to meet her very own tall, dark and handsome hero, who happened to be her boss, and she promptly married him and started a family.

It wasn't until she was pregnant with her second child that she found her very first Harlequin Presents book in a local thrift store. She'd never read a Harlequin romance before, and by the time she'd reached the happily ever after she had fallen in love.

She devoured as many as she could get her hands on after that, and she knew that these were the books she wanted to write!Soon after that she saw that Harlequin was running a competition to win an editor for a year. She decided that was her sign to get in gear and start writing again.

So she wrote her chapter and synopsis and hit send with trembling hands. She didn't get any feedback from the contest, but it was the boost she needed to get her first full manuscript finished and submitted to Harlequin Presents.

Nearly two years later, while pregnant with her third child, she received The Call from her editor, informing her they wanted to buy that manuscript. She was very glad that the good news didn't send her promptly into labor! She still can't quite believe she's blessed enough to see her name on not just any book, but her favorite books.

Maisey lives with her supportive, wonderful, diaper-changing husband and three small children across the street from her parents, and the home she grew up in, in the wilds of southern Oregon.She enjoys the contrast of living in a place where you might wake up to find a bear on your back porch and then head into the home office to write stories that take place in exotic urban locales.

Wife to her high school sweetheart, mother to two little girls, former salon owner - oh, and author - Jules Bennett isn't afraid to tackle the blessings of life head-on. Once she sets a goal in her sights, get out of her way or come along for the ride...just ask her husband.

Jules lives in the Midwest where she loves spending time with her family and making memories. Jules's love extends beyond her family and books. She's an avid shoe, hat and purse connoisseur. She feels that her font of knowledge when it comes to accessories is essential when setting a scene.

Jules participates in the Silhouette Desire Author Blog and holds launch contests through her website when she has a new release.

Be the first to review Want Me. 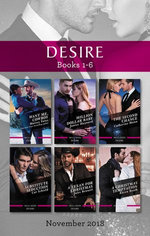 by Janice Maynard, Karen Booth,  Catherine Mann and others