War on Our Doorstep: The Unknown Campaign on North America's West Coast

In June 1942, Japanese troops occupied the Aleutian islands of Attu and Kiska in Alaska, the first enemy occupation of US territory since the War of 1812. For the next year a bloody conflict raged that was nearly invisible to most North Americans as Canadian and American soldiers, airmen and sailors went north to hold the Japanese in check.

This is the complete story of the war in the North Pacific, including details of: Japanese subs lurking off the west coast, sinking ships and shelling the coast of British Columbia; the submarine-launched airplane that bombed Oregon's forests; the surreal tale of balloon-bombs crossing the Pacific to North America.

Brendan Coyle has done a magnificent job in this comprehensive review of the war on the West Coast. No other single volume has so neatly tied together the myriad stories of how the war affected people in British Columbia, California, Oregon, Washington, and Alaska. —Jim Delgado

Be the first to review War on Our Doorstep: The Unknown Campaign on North America's West Coast. 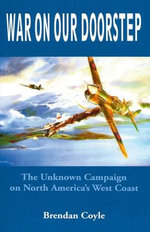 War on Our Doorstep: The Unknown Campaign on North America's West Coast