We Owe You Nothing

“Collects some of [Punk Planet’s] best interviews from the past half-decade . . . serves as a reminder that punk is not just music but a movement.” —The A.V. Club

Updated with six more interviews and a new introduction, the expanded edition of We Owe You Nothing is the definitive book of conversations with the underground’s greatest minds from the pages of Punk Planet. New interviews include talks with bands like The Gossip and Maritime, a conversation with punk legend Bob Mould, and more . . . in addition to the classic interviews from the original edition: Ian MacKaye, Jello Biafra, Thurston Moore, Noam Chomsky, Kathleen Hanna, Black Flag, Sleater-Kinney, Steve Albini, Frank Kozik, Art Chantry, and others.

“We Owe You Nothing made me feel vital and alive.” —Seattle Weekly

“The magazine Punk Planet has quietly been one of the most intelligent voices in the kingdom of punk and post-punk . . . [and] anyone with the vaguest interest in music would be well-served to learn from these captured moments [in We Owe You Nothing].” —Detroit Metro Times

“No book has illustrated this relationship between punk and its believers more than We Owe You Nothing.” —Daily Herald

“Straight talk with no bullshit, no spin. The result is an airblast of honesty, an antidote of attitude. Music fans will love this book, and so will fans of independent thinking.” —Flagpole

“A wholly unique vision wrought not by consensus but by cultural cynicism and never-say-die musical populism.” —Magnet

Be the first to review We Owe You Nothing. 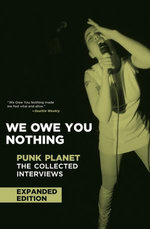 We Owe You Nothing

Punk Popular culture
Hold on while we process your request.