Wedding Bell Wishes/It Started at a Wedding.../The Wedding Planner and the CEO/Wedded for His Royal Duty

It Started At A Wedding... - Kate Hardy

Claire Stewart thinks her day can’t get any worse – but she’s wrong! As if losing her best friend’s wedding dress isn’t enough, she’s now faced with the ultra-handsome, ultra-successful brother of the bride, Sean Farrell...oh, and she’s had a crush on him for years!

Sean might have turned his back on romance a long time ago, but somehow Claire manages to slip inside his heart. The trouble is Sean knows that when it comes to Claire one scorching, unforgettable kiss at a wedding just isn’t enough...

The Wedding Planner And The CEO - Alison Roberts

Penelope Collins is determined that her first shot at planning a celebrity wedding won’t be her last. And if that means begging gorgeous CEO Rafe Edwards for a spectacular last minute firework display, so be it!

They may seem like total opposites, but brooding Rafe also knows what it’s like to never have had the warmth of a loving family. There are plenty of fireworks – some sparked by his kisses! –but he’s also the only man who understands what she’s craving. A family – one she and Rafe can build together...?

When Prince Alexandros Sancho discovers he’s inherited his older brother’s betrothed, he’s horrified! Princess Eva might be beautiful, but his belief in marriage died with his first love. However, he must marry her – unless Eva can be persuaded to break the engagement herself?

Except Alex’s plan backfires! Far from putting her off, he finds himself falling for the warm but shy princess. Can he convince Eva to be his royal bride – for real?

One of eleven children, Susan Meier was raised on a small farm in western Pennsylvania and attributes her love of stories and writing to lying in grassy fields staring at the clouds daydreaming!

Susan is an avid but terrible golfer, and a woman who desperately wants to learn to cook without having to involve the fire department. Her goals include getting involved with blogging-but hopes no one is holding his or her breath waiting for that-losing fifteen pounds-don't hold your breath on that one either-and figuring out the financing for an ocean front condo in Virginia Beach. She swears she will wear SPF thirty sunblock and never subject anyone to the site of her in a bikini! (Unless asked-and paid...handsomely.)

Though in the city now, she still lives in Pennsylvania with her husband, three children and two very personable cats. Susan loves hearing from fans and can be reached through her website above.

Be the first to review Wedding Bell Wishes/It Started at a Wedding.../The Wedding Planner and the CEO/Wedded for His Royal Duty. 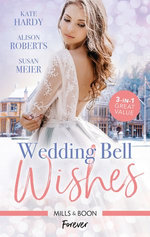 Wedding Bell Wishes/It Started at a Wedding.../The Wedding Planner and the CEO/Wedded for His Royal Duty