Life's a vacation when you live in the world's wackiest motel! P.T. and his best friend, Gloria, are getting ready for St. Pete Beach's first-ever Sandapalooza! The Wonderland's biggest rival, the Conch Reef Resort, is doing everything it can to win the sand sculpture contest, but P.T. has bigger problems: The Wonderland has opened a new restaurant--the Banana Shack--and running a restaurant is harder than it looks! And to make matters worse, a royal guest's priceless tiara has gone missing, and the prime suspect is the Wonderland's beloved housekeeper! Can P.T. and Gloria win the contest, keep the restaurant going, and clear Clara's name?

Chris Grabenstein is the author of the New York Times bestsellers The Island of Dr. Libris and Escape from Mr. LemonCello's Library as well as the co-author (with James Patterson) of the #1 Bestselling series I Funny, House of Robots, and Treasure Hunters.

Be the first to review Welcome to Wonderland #3: Sandapalooza Shake-Up. 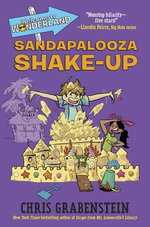