What's Gone, What's Left Behind (The Witch Who Came in from the Cold Season 2 Episode 8)

This is the 8th episode in the second season of The Witch Who Came In From The Cold, a 13-episode serial from Serial Box Publishing. This episode written by Max Gladstone.

Carefully laid plans hit explosive roadblocks as Ice, Flame, CIA, and KGB all meet at the docks of the Vltava. Tanya’s efforts for Zerena bear fruit, though their value is debatable. Alestair and Nadia grow closer. Edith and Josh see something they won’t soon forget.

Be the first to review What's Gone. 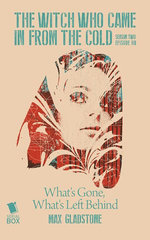 What's Gone, What's Left Behind (The Witch Who Came in from the Cold Season 2 Episode 8)