Who Will Save the Planet?

Fourteen-year-old Jason can’t work out how to get climate change fixed—until he saves the life of the mysterious and powerful Graham. Graham promises a reward, and Jason asks him to do something to stop climate change. The request is caught by the media, so Jason thinks the man’s trapped and has to keep his word. But Graham’s got other ideas.

A battle of wits ensues as Jason tries to stop his captive from squirming out of his promise. Encounters that initially sound like fun end up getting heavy, and Jason’s summer holidays get messed up by pushy reporters and resentful townspeople—not to mention a professor who seems to be on both sides at once.

Jason finds that things aren’t as simple as he first thought. With a deadline approaching, he has to decide whether to force Graham to honour his promise, or admit that he could actually be mistaken.

Be the first to review Who Will Save the Planet?. 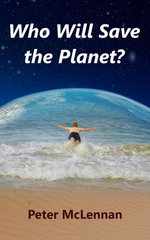 Who Will Save the Planet?