The first book in the Sergeant Cribb series, from Peter Lovesey.

In Victorian London, race-walking, or 'wobbles', are all the rage. So on a Monday morning in November 1879 the crowds gather for Islington's bizarre six-day endurance walking race.

By Tuesday, one of the contestants is dead. Tetanus from a blister is assumed, but then there is a second death, and this time it's definitely murder. A bemused Sergeant Cribb from Scotland Yard is called in, along with Constable Thackeray, and they soon discover that something foul is at play.

Be the first to review Wobble to Death. 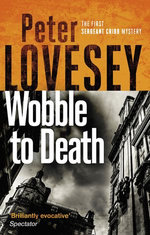