Hugo Award Finalist Author. Lost pulp classic out of print over 60 years. Lin Carter, engineer engaged in top secret research, was shaving when the knock came at his apartment door. It could mean an interruption that would make him late for work, he feared - and his fears were realized with a vengeance as a girl so beautiful she was "out of this world" pushed the door open before he could reach it. Carter's apartment door was the -first of many doors she was to open for him in the rapid succession incredible, out-of-this-world adventures that were to take Carter through the dangers and breathtaking wonders of realms undreamed of by science yet described with amazing accuracy by works that were supposed to be pure fiction! Worlds within worlds, through door after door, as his love for this girl drew him on. But the last door of all was already open and through it was coming the living cold of outer space, on invisible wings. To close that door Lin had to close his heart against his love in a solemn pact with woman of another world who held, for one awful moment, the power to doom all mankind, but was willing to bargain it for Carter's soul. An innovative thinker, Rob Phillips was nominated for the 1959 Hugo Award for Best Novelette for his story, "Rat in the Skull." His specialty was mind-stretching tales of the "thought-variant" type. These were stories intentionally constructed to awaken new ways of seeing and thinking about the universe in its readers via "conceptual breakthroughs" that mentally shifted them from an old, conventional paradigm to a dazzling new one. The Encyclopedia of Science Fiction hailed Phillips' work as "ingenious exercises in paradoxes of perception." Worlds Within is a novel length thought variant story. With an Introduction about the author and the inspiration for this book. Never reprinted before.

Be the first to review Worlds Within. 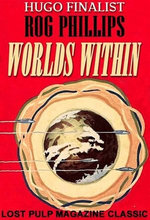