This is an International Magazine, please allow up to ten to twelve weeks for your first delivery. Delivery is direct from the publisher and is only available for delivery within Australia.

Take out a subscription to Men?s Health magazine, the UK?s best-selling quality men?s magazine. Every month Men?s Health magazine are on hand with all the tips and expert advice you?ll ever need to get you into peak condition. A Men?s Health magazine subscription delivers unrivalled coverage on the subjects that matter most, it really is a must-have read. There?s fitness, weight-loss, health and nutrition plus you?ll also get the latest on sex and relationships, gear, travel, style and grooming. Subscribe now and start saving! Launched in 1987 as a health-oriented service magazine, Men?s Health magazine is the world?s largest men?s magazine brand and has 38 editions globally Men?s Health magazine has evolved over the years into more of a lifestyle magazine for men and covers all aspects of a man?s life, including health, fitness, relationships, travel, nutrition, technology, finance and fashion. David Zinczenko has been the editor-in-chief of Men?s Health since 2000 and during his 10 year tenure the magazine?s circulation has increased by 30 percent. In 2004, Zinczenko began putting celebrities and athletes on the cover, such us David Beckham, Jason Statham and Josh Duhamel, and more controversially, with their shirts on?a big departure from the cover look of the 1990s. For its 20th Anniversary issue in November 2008, Men's Health scored its biggest cover get ever with their exclusive interview and photo shoot with future President-elect Barack Obama. He's the prototypical Men's Health guy: fit successful, a good dad, a good husband, and a guy who could put up big numbers on the electoral board, and the backboard. He was a natural for the cover of the magazine during this important time for our nation, said David Zinczenko. Obama understands that Men's Health has a massive reach and when you want to get a message to men, there's no better Please allow 10-12 weeks for delivery of the first issue for this international title.

This is an International Magazine, please allow up to ten to twelve weeks for your first delivery. Delivery is direct from the publisher and is only available for delivery within Australia.

Be the first to review Men's Health (UK) - 12 Month Subscription. 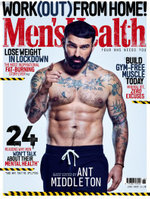 International Health & Fitness
Hold on while we process your request.