Empire of Enchantment: The Story of Indian Magic

A brilliant and erudite book that unearths fascinating sources and vividly enchanting tales about the history of Indian magic.

As Britain extended its dominion over the subcontinent, such magicians became synonymous with India and even travelled to Britain, sometimes remaining for decades. Western illusionists, threatened by these 'primitive' practitioners, appropriated Indian attire, tricks, and stage names; Indian magicians fought back, earning the grudging respect of their European peers.

This heavily illustrated book tells the extraordinary, untold story of how Indian magic descended from the realm of the gods to become part of daily ritual and popular entertainment across the globe. Drawing on ancient religious texts, early travellers' accounts, colonial records, modern visual sources, and magicians' own testimony, Empire of Enchantment is a vibrant narrative of India's magical traditions, from Vedic times to the present day.

John Zubrzycki has worked in India as a diplomat, consultant, tour guide and correspondent for The Australian. His background is in South Asian history and Hindi, and his doctoral thesis (University of New South Wales) concerns historical links between Indian and Western stage magicians.

John’s previous books include The Last Nizam and The Mysterious Mr Jacob.

Be the first to review Empire of Enchantment: The Story of Indian Magic. 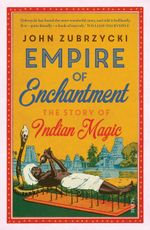 Empire of Enchantment: The Story of Indian Magic