A Music Writer's Journey into Madness

Now in paperback - a tale of loving, living and surviving rock music.

Michael Odell is a rock music writer who takes his responsibility as cultural gatekeeper seriously; he asks rock stars the forbidden questions to discover whether they're worthy of readers' admiration.

But after interviewing Mick Jagger and Keith Richards - two of the 'Big Six' icons - Michael is depressed. He has a public meltdown while chaperoning Oasis at an awards ceremony; he's lost joy in his bathroom full of rock'n'roll memorabilia; and his young son is in trouble at school for emulating rock star behaviour.

Reluctantly Michael consults Mrs Henckel, a no-nonsense therapist with zero experience of pop culture. As Michael addresses his feelings about the past, in particular his failed teenage band, Mental Elf, he's forced to confront the question: is it finally time to grow up and forget rock'n'roll?

'One of the best music books ever written, because Michael Odell knows music isn't about the musicians - it's about what it does to the listener, even if what it does ends up being wholly disastrous. It's sad, funny, fascinating and wise.' Michael Hann, former Guardian music editor

'Hilarious and disarmingly honest; a journey into the neurosis of rock fame, but through doors you don't expect.' Rachel Joyce, author of The Unlikely Pilgrimage of Harold Fry

Michael Odell is a former contributing editor to Q magazine and has written about music for NME, the Guardian, the Independent and Spin, among others. Currently he does interviews and writes on family matters for The Times. He lives in Bristol.

Be the first to review Rock Bottom. 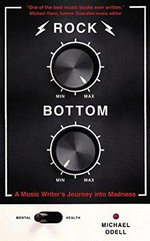