All the Albums, All the Songs

In-depth looks at all 109 studio cuts--the history, the people, the songwriting and recording, the politics, and plenty of stunning photography!

Formed in London in 1976 by Joe Strummer, Mick Jones, and Paul Simonon at the outset of that city’s punk rock boom, The Clash went on to outlast their peers and create some of the most influential albums in rock ’n’ roll--not just punk--even breaching the mainstream in 1982 and earning the title “The Only Band That Matters” along the way. In their eight-year career, The Clash offered six CBS Records studio releases, including one double and one triple LP, and increasingly melded influences ranging from rockabilly to ska, reggae, and even hip-hop into their sound.

Veteran music journalist Martin Popoff dissects each of the 91 tracks, including the circumstances that led to their creation, the recording processes, the historical contexts, and more. In addition, an introductory essay sets the scene for each album, while sidebar features explore influences on the band, album art, non-LP singles, the band’s staunch political stance, and song details, such as running time, instruments played, engineers, and studios.

Martin Popoff has been described as the worlds most famous heavy-metal journalist, though he has covered plenty of Punk and New Wave albums in his career of 7,000-plus album reviews.

He has also worked on film documentaries about Rush and ZZ Top. He lives in Toronto with his wife and son.

Be the first to review The Clash. 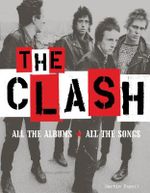