An unforgettable literary crime debut that brings the darkness in an Australian country town vividly to life, as it slowly reveals its devastating secrets.

Growing up in a small country town, they spend their days playing cricket, yabbying in local dams, wanting a pair of Nike Air Maxes and not talking about how Fab's dad hits him, or how the sudden death of Ben's next-door neighbour unsettled him. Almost teenagers, they already know some things are better left unsaid.

Then a newcomer arrived in the Wimmera. Fab reckoned he was a secret agent and he and Ben staked him out. Up close, the man's shoulders were wide and the veins in his arms stuck out, blue and green. His hands were enormous, red and knotty. He looked strong. Maybe even stronger than Fab's dad. Neither realised the shadow this man would cast over both their lives.

Twenty years later, Fab is still stuck in town, going nowhere but hoping for somewhere better. Then a body is found in the river, and Fab can't ignore the past any more.

'Very little fiction is as emotionally true as this. Wimmera is a dark and disturbing story from a substantial new talent.' Saturday Paper

'This is literary crime fiction at its best.' Books+Publishing

It was also shortlisted for the Australian Book Industry Awards Literary Fiction Book of the Year, and the Matt Richell Award for New Writer of the Year. His second novel, The Rip, is to be published by Hachette Australia in March 2019. It is already receiving critical acclaim.

Mark's shorter work has appeared in The Guardian, The Age, The Big Issue, and in journals both here and overseas. His writing is also sometimes heard on ABC Radio National.

Mark graduated with a criminal justice degree and worked extensively in the justice system, before changing direction and deciding to write. Originally from Italy, he grew up in rural Victoria. Mark now lives in Melbourne and is already working on his next work of fiction.

Be the first to review Wimmera. 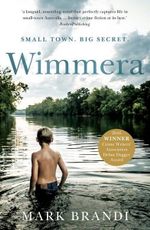