Be the first to write a review
Tweet
$24.95
28 Days Later:
A powerful virus is unleashed on the British public following a raid on a primate research facility by animal rights activists. Transmitted in a drop of blood and devastating within seconds, the virus locks those infected into a permanent state of murderous rage. Within 28 days the country is overwhelmed and a handful of survivors begin their attempts to salvage a future, little realising that the deadly virus is not the only thing that threatens them.

28 Weeks Later:
Six months after the rage virus has annihilated the British Isles, the US Army declares that the war against infection has been won, and that the reconstruction of the country can begin. Under the strict supervision of the US Military, the first wave of refugees is allowed back into the city. Among them are Don (Robert Carlyle), his new girlfriend, Scarlett (Rose Byrne), and Dons two children. Don lost his wife during the original infection, while Scarlett lost her entire family. All seems under control until a new carrier of the virus makes his way within the quarantined area. As the only known live specimen, he becomes a vital tool to the scientists who hope to learn from their discovery. Call it carelessness or call it bad luck, but the virus eventually spreads once again and now may be even more difficult to contain than the first time around 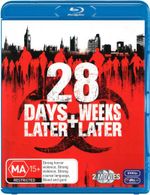