Be the first to write a review
Tweet
$34.95
BATTLESHIP: From the company that brought you Transformers, Battleship is an epic-scaled action-adventure that unfolds across the seas, in the skies and over land as our planet fights for survival against a superior alien force.

Directed by Peter Berg and starring Taylor Kitsch, Alexander Skarsgard, Rihanna and Liam Neeson, Battleship features some of the most incredible special effects and breathtakingly explosive action sequences ever filmed!

WHITEHOUSE DOWN: Capitol Policeman John Cale (Charming Tatum) has just been denied his dream job with the Secret Service of protecting President James Sawyer (Jamie Foxx). Not wanting to let down his little girl with the news, he takes her on a tour of the White House, during which the complex is overtaken by a heavily armed paramilitary group. Now, with the nation's government falling into chaos and time running out, it's up to Cale to save the president, his daughter and the country.

BATTLE: LOS ANGELES: Witness the end of civilisation unfold, as hostile alien invaders attack the planet. As people everywhere watch the world's great cities fall, Los Angeles becomes the last stand for mankind in a battle no one expected. Now it's up to a Marine staff sergeant (Aaron Eckhart) and his platoon to draw a line in the sand as they take on an enemy unlike any they've ever encountered, in this epic sci-fi action film.

2012: From director Roland Emmerich, comes the ultimate action-adventure movie, exploding with ground-breaking special effects. As the world faces a catastrophe of apocalyptic proportions, cities collapse and continents crumble. 2012 brings an end to the world and tells of the heroic struggle of the survivors. 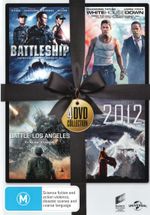