Be the first to write a review
Tweet
$29.95
LOVE ACTUALLY: From the makers of Notting Hill and Bridget Joness Diary comes the ultimate romantic comedy. This blockbuster film includes a fantastic all star cast and an outstanding soundtrack. The hilarious Love Actually explores the ups and downs of relationships in the weeks building up to Christmas. Boyfriends and girlfriends, husbands and wives, fathers and sons and rock stars and managers all combine to make Love Actually not just one story but ten very different ones.

NOTTING HILL: William Thacker (Hugh Grant) is the owner of a bookshop in the heart of Notting Hill in London. One day, by a one in a million chance, the worlds most famous actress, Anna Scott (Julia Roberts), comes into his shop. He watches in amazement as she leaves and he thinks he will never see her again. But fate intervenes and minutes later William collides with Anna on Portobello Road. So begins a tale of romance and adventure in London W11. With a little help from his chaotic flatmate Spike and his old friends, Max and Bella (Tim McInnerny and Gina McKee), William seeks the face he cannot forget...

BRIDGET JONES: THE EDGE OF REASON: You thought the last movie was happily ever after? You thought wrong! Bridget (Renee Zellweger) and Mark (Colin Firth) are now together but for how long? A jellyfish by the name of Rebecca (Jacinda Barrett), Bridgets relationship paranoia, unusual horsemanship, magic mushrooms and a stint in prison are just some of the things Bridget has to face in The Edge of Reason. Add to that the return of Daniel Cleaver (Hugh Grant) and you have the makings of one of the funniest films this year. Will they live happily ever after? Watch and find out.

WIMBLEDON: Wimbledon is a sweet and funny tale of romance across the net. Peter Colt (Paul Bettany) is an unlucky guy, scoring love both professionally and personally. Seeded near the bottom of the world tennis ranks, he manages to score a wild card, allowing him to play in the prestigious Wimbledon tournament. There, he meets and falls in love with American tennis star Lizzie Bradbury (Kirsten Dunst).

Fuelled by a mixture of his newfound luck, love and on court prowess, Peter works his way up the ranks of the tournament players and actually stands a chance of fulfilling his lifelong dream of winning the mens singles title if his luck can just hold out. 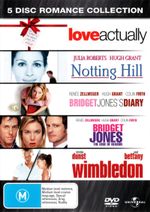