American Beauty:Look closer at the most talked about film. A funny, moving and shocking journey through life in suburban America. Look closer at fortysomething ad man Lester Burnham and his status-seeking wife, Carolyn, as their marriage and lives slowly unravel. Lester's wife hates him, his daughter Jane regards him with contempt, and his boss is positioning him for the axe. Look closer, as Lester decides to make a few changes in his life; the freer he gets, the happier he gets. But Lester is about to learn that the ultimate freedom comes at the ultimate price. Look closer at an acclaimed cast led by the brilliant performances from Kevin Spacey as Lester and Annette Bening as Carolyn. Look closer at a "flat-out masterpiece" (Rod Dreher, New York Post). Won 5 Oscars including - Best Picture, Best Director, Best Actor (Kevin Spacey), Best Original Screenplay (Alan Ball), Best Cinematography (Conrad L Hall).Forrest Gump:Forrest Gump is the movie triumph that became a phenomenon. Tom Hanks gives an astonishing performance as Forrest, an everyman whose simple innocence comes to embody a generation. The winner of six Academy Awards, including Best Picture, Best Director (Robert Zemeckis), and Best Actor (Tom Hanks)A Beautiful Mind:Winner of 4 Academy Awards including best picture, A Beautiful Mind is directed by Academy Award winner Ron Howard and produced by his long time partner Brian Grazer. A Beautiful Mind stars Russell Crowe in an astonishing performance as brilliant mathematician John Nash, on the brink of international acclaim when he becomes entangled in a mysterious conspiracy. Now only his devoted wife (Acadamy Award winner Jennifer Connelly), can help him in this powerful story of courage, passion and triumph.

Be the first to review A Beautiful Mind / American Beauty / Forrest Gump. 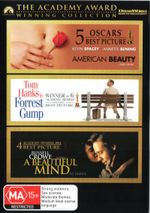