ALIEN: In space no one can hear you scream. Alien is the first chapter in one of the most popular and terrifying sagas in science fiction history. The nightmare begins when the crew of a spaceship investigate a transmission from a desolate planet, and discover a life form that is perfectly evolved to annihilate mankind. Sigourney Weaver stars as the iron willed Ripley, who is destined to battle the galaxy's ultimate creature.

ALIENS: In this action-packed sequel to Alien, Sigourney Weaver returns as Ripley, the only survivor from mankind's first encounter with the monstrous Alien. Her account of the Alien and the fate of her crew are received with scepticism--until the mysterious disappearance of colonists on LV-426 lead her to join a team of high-tech colonial marines sent in to investigate.

ALIEN 3: This time it's hiding in the most terrifying place of all Lt Ripley is the lone survivor when her crippled spaceship crash lands on Florina 161, a bleak wasteland inhabited by former inmates of the planet's maximum security prison. Ripley's fears that an alien was on board her craft are confirmed when the mutilated bodies of ex-cons begin to mount.

Without weapons or modern technology of any kind, Ripley must lead the men into battle against the terrifying creature. And soon she discovers a horrifying fact about her link with the alien, a realisation that may compel her into a final, desperate act.

ALIEN RESSURECTION: 200 years have passed since Ripley made the ultimate sacrifice in Fiorina 161. But over the years, and after seven horrific failures, scientists have finally cloned a perfect replica of Ripley, which includes the alien Queen growing insider her at the time of her death. But this new breed of alien is far more intelligent than its predecessors a fact the scientists don't realise until after The Betty has arrived with additional human hosts.

PROMETHEUS: A team of scientists and explorers journey to the darkest corners of the universe searching for the origins of mankind. But what they find could threaten all life on Earth, leading to a terrifying battle to save the future of the human race!

Bound for a remote planet on the far side of the galaxy, the crew of the colony ship Covenant discovers what they think is an uncharted paradise, but is actually a dark, dangerous world--whose sole inhabitant is the "synthetic" David (Michael Fassbender), survivor of the doomed Prometheus expedition. 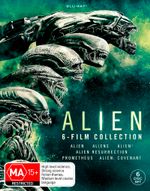