AN EDUCATION: It's 1961 and attractive, bright 16-year-old schoolgirl, Jenny (Corey Mulligan) is poised on the brink of womanhood. Stifled by the tedium of adolescent routine, Jenny can't wait for adult life to begin. One rainy day, her suburban life is upended by the arrival of an unsuitable suitor, 30-ish David (Peter Sorsgaard). To Jenny's frank amazement, he manages to charm her conservative parents Jack (Alfred Molina) and Marjorie (Cara Seymour), and effortlessly overcomes any objections to their daughter's older suitor. Very quickly, David introduces Jenny to a glittering new world of classical concerts and late-night suppers with his attractive friend and business partner, Danny (Dominic Cooper) and Danny's girlfriend, the beautiful but vacuous Helen (Rosamund Pike). Just as the family's long-held dream of getting their brilliant daughter into Oxford seems within reach, Jenny is tempted by a more exciting life. Will David be the making of Jenny or her undoing?
LIKE CRAZY: Like Crazy beautifully illustrates how your first real love is as thrilling and blissful as it is fragile. When a British college student (Felicity Jones) falls for her American classmate (Anton Yelchin), they embark on a passionate and life-changing journey - only to he separated by circumstances beyond their control. "Crazily inventive and totally irresistible," Peter Travers, Rolling Stone. Like Crazy explores how a couple faces the real challenges of being together and of being apart.

REVOLUTIONARY ROAD: Leonardo DiCaprio and Academy Award Kate Winslet reunite for two powerful, ground-breaking performances in Revolutionary Road. Based on the bestseller by Richard Yates and directed by Sam Mendes, this mesmerising and moving story follows the lives of a passionate young couple living in suburban Connecticut who decide to risk everything to pursue their dreams. They're willing to break away from the ordinary - but can they do it without breaking apart? Nominated for 3and acclaimed by critics, Revolutionary Road is hailed as "one of the best films of the year.

UP IN THE AIR: Ryan Bingham (George Cooney) is truly living the high life. Flying all over the world on business, he never stops moving... until he meets Alex, a fellow passenger, and learns that life isn't about the journey, but the connections we make along the way. Acclaimed by critics and audiences everywhere, "Up in the Air is first class all the way..." Brisbane Courier Mail

FORCES OF NATURE: It's only two days before his wedding when Ben's (Ben Affleck) plane skids out of control, leaving him stranded in New York with no way home to his nervous fiance in Savannah. Against his better judgement, the reliable groom-to-he hitches a ride with free-spirited traveller Sarah (Sandra Bullock) - setting off the year's most riotous road trip. At first, these two opposites attract nothing but trouble in a side-splitting series of comic mishaps and unnatural disasters. But an irresistible attraction and the forces of nature threaten to detour them forever in this sexy, whirlwind adventure.

Be the first to review An Education / Forces of Nature / Like Crazy / Revolutionary Road / Up in the Air (Epic Drama 5 Movies). 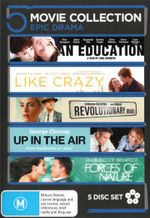