by Joel Schumacher, David Mallet, Various Others, Sarah Brightman,  Donny Osmond and others

Be the first to write a review
Tweet
27%
OFF RRP  $40.00 $29.25
THE PHANTOM OF THE OPERA: tells the story of a disfigured musical genius (Gerard Butler) who haunts the catacombs beneath the Paris Opera, waging a reign of terror over its occupants. When he falls fatally in love with the lovely Christine (Emmy Rossum), the Phantom devotes himself to creating a new star for the Opera, exerting a strange sense of control over the young soprano as he nurtures her extraordinary talents.

CATS: With a star cast including Elaine Paige and Sir John Mills, this stunning production brings an amazing musical to life. Cats sets a new standard for the filming of musicals. Andrew Lloyd Webbers Cats, the most famous musical of all time, first exploded onto the West End stage in 1981. Memory, one of its many classic songs, became an instant worldwide hit. Since then Cats has smashed records and conquered the world. Using the latest technology, all the excitement, thrill, romance and intimacy of this theatrical legend has been captured on screen.

JESUS CHRIST SUPERSTAR: When Jesus Christ Superstar first exploded onto the West End stage in 1971, it was clear that the musical world would never be the same again. Tim Rice and Andrew Lloyd Webbers rock opera tells the story of the last seven days in the life of Jesus Christ. Shot at Pinewood Studios, this filmed stage version stars Glenn Carter and Rik Mayall and captures one of the best scores Andrew Lloyd Webber has ever written.

JOSEPH AND THE AMAZING TECHNICOLOR DREAMCOAT: Inspired by the record breaking London Palladium production, this brilliant performance stars Donny Osmond, Maria Friedman, Richard Attenborough and Joan Collins. A lively and colourful journey through ancient Egypt, Joseph and the amazing technicolour follows the rags to riches story of Joseph, his eleven brothers and the coat of many colours. This a dream of a show for all the family.

BY JEEVES: By Jeeves is the musical comedy by Alan Ayckbourn and Andrew Lloyd Webber based on the characters of P.G. Wodehouse. An adventure of the hapless Bertie Wooster (John Scherer), a young gentleman about town with a penchant for getting himself into personal difficulties, particularly with women. It is inevitably left to his unflappable manservant Jeeves (Martin Jarvis) to provide tide and elegant rescues. Enjoy this outrageous comedy as Jeeves guides Bertie through a series of hapless adventures and improvised chaos. 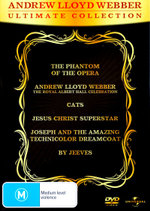 by Joel Schumacher, David Mallet, Various Others, Sarah Brightman,  Donny Osmond and others

Musical Musical
Hold on while we process your request.