Be the first to write a review
Tweet
RRP  $19.95 $18.25
All new triple packs for the teens featuring Angus Thongs & Perfect Snogging, Mean Girls and Clueless.
ANGUS, THONGS & PERFECT SNOGGING: Georgia Nicolson is fourteen, lives with nosey parents who don't understand her, an annoying three year old sister and has to wear a beret to school. She would, however, rather be blonde, have a smaller nose and a boyfriend. Revolving around her hilarious journal entries, prepare to be engulfed in the world of the soaring joys and bottomless angst of being a teenager.
MEAN GIRLS:Raised in the African bush country by her zoologist parents, Cady thinks she knows all about the "survival of the fittest." But the law of the jungle takes on a whole new meaning when the home-schooled 15-year-old enters public high school for the first time. Trying to find her place among jocks, mathletes and other subcultures, Cady crosses the meanest species of all the Queen Bee, aka the cool and calculating Regina, leader of the school's most fashionable clique, The Plastics. When Cady falls for Regina's ex-boyfriend, though, the Queen Bee is stung and she schemes to ruin Cady's social future. Cady's own claws soon come out as she leaps into a hilarious "Girl World" war that has the whole school running for cover.
CLUELESS: Alicia Silverston sparkles as Cher, the matchmaking 15-year-old Beverly Hills High schooler who has shopping and boys on her mind, but mostly shopping. Also starring Brittany Murphy as a dowdy transfer student, Jeremy Sisto as her potential mate and Paul Rudd as Cher's sensitive "Baldwin" step brother, Clueless is back to capture the hearts of a whole new generation.

Be the first to review Angus. 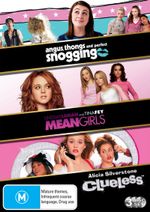